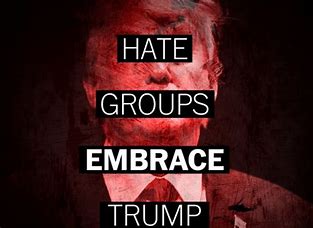 Southern California has had its share of hate groups like the one that attacked the Poway synagogue in San Diego, where one died and three were wounded. The Guardian labels it "a sunny, liberal enclave" and "an incubator of far-right politics, and it’s far from the first time its Jewish communities have faced violent threats." This is how Heidi Beirich of the Southern Poverty Law Center describes it...

“Hate groups and hate activity run pretty deep in Southern California, and have for a very long time. This activity is deeply rooted in Orange county and northern San Diego.”

The KKK committed several acts of violence in the state during the 1920s, and a Klan member was elected to the Los Angeles city council in 1923. The Guardian reports...

"In San Diego, violence, harassment and organized discrimination against Mexican immigrants, alongside Jews and Catholics, was a major focus of the Klan in the 1920s and 1930s."

That is then; Donald Trump is now. Here's a map that documents where President-elect Trump, his supporters, or his staff harassed or attacked Latinos, immigrants, Muslim-American, African-Americans, and other minority and marginalized groups.

NOTE: You can view individual incidents on the map by clicking directly on the Trump head “markers,” or you can click on the box-shaped symbol at the top left corner of the map to see a pull-down list of the incidents. I have posted on T-rump's hate campaigns before with this post, "Donald Trump has reinvigorated racism and hate." You can see more by going to my blog and searching, "Donald Trump Hate."

Never in the history of this country has there been a president who stoops so low as to do the things that Donald Trump has done. Nor have any placed their ego above the country they serve. Trump will go down in history as...I'll let you fill that in.

Please give me your comments on this issue.