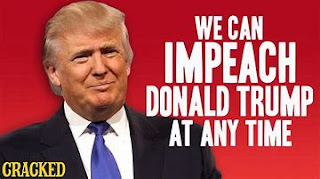 There are two issues that clearly lay solid grounds for Donald Trump's impeachment. Neither has been given much play in the media. The first I blogged on May 8: "Trump would be in jail if he wasn't president?" It reported on the 450 ex-prosecutors who indicated they would prosecute him for obstruction based on the Mueller Report saying they...


"have signed on to a statement asserting special counsel Robert S. Mueller III’s findings would have produced obstruction charges against President Trump — if not for the office he holds."

The number of ex-prosecutors today is over 800, almost doubled, but still growing. My thoughts in the above post were...


Although Mueller didn't commit on whether Donald Trump should be charged, "citing a Justice Department legal opinion that sitting presidents cannot be indicted, as well as concerns about the fairness of accusing someone for whom there can be no court proceeding," he pretty much left it up to Congress to decide. But the cowards they are, led by the lowlife Senate head, Mitch McConnell, have done nothing.

Rudy Giulani's ex-assistant was even among the former prosecutors protesting, signing a statement Monday that Trump would have been charged with obstruction saying...


“Each of us believes that the conduct of President Trump described in Special Counsel Robert Mueller’s report would, in the case of any other person not covered by the Office of Legal Counsel policy against indicting a sitting President, result in multiple felony charges for obstruction of justice.”

These 800 plus ex-prosecutors are so sure about their conviction it gives credibility and comfort to the fact that Donald Trump could very well be prosecuted when he leaves office.

For number two, my post "Renown Yale psychiatrist: Muller Report proves Trump is mentally challenged" makes a case for the fact that Trump is not mentally capable of holding the office of President of the United States. And that is startling when so many support this maniac knowing from his behavior since entering office that T-rump is definitely a wacko.

Yale psychiatrist Bandy X. Lee, a renowned expert on violence and forensic psychiatry says "It is a mental health analysis of the Mueller report "replete with information for a mental health interpretation." Lee says to Raw Story...


"Seldom do we have such voluminous information on a person’s behavior, verified at the level of sworn testimony. Hence, my colleagues and I saw this as a part of our ongoing, primary professional responsibility to protect society and to warn against potential harm to public health, as our ethics and the law require. The report is an attempt to continue educating the public."

Obviously she refers to the Trump administration and Raw story wanted to know what the report said...


"Our report is quite damning. What the special counsel’s report revealed, through consistent and abundant data, was a pervasive and profound pattern of lack of capacity."

"lack of basic comprehension--faulty information processing--lack of sound decision making--behavior that places oneself or others in danger."