The NRA and gun violence are inseparable 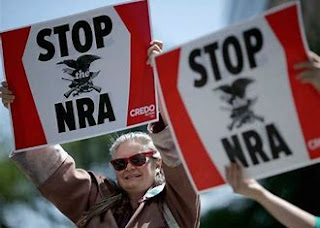 The NRA has suppressed facts on gun violence for years, actually since the 1990s when the organization...


"used its influence over NRA member and Arkansas Rep. Jay Dickey to insert an amendment into the federal spending bill that has effectively prevented the Centers for Disease Control and Prevention (CDC) from funding any research on gun violence."

Gun statistics are still hard to come by, with most information coming from private studies done by experts in the field. Because the NRA has bombarded the public with propaganda over the years, and the group repeatedly buys a cowardly Congress with contributions, we now have 393 million guns on the street, resulting in almost 40,000 deaths annually, with over 300 mass shootings in 2018. The NRA's policies are clearly the source of American gun violence.

Before his demise as NRA president, Oliver North warned of financial woes in the organization partly due to $40 million spent on legal fees. There is also the problem of corporate sponsors deserting the group because of their recent notoriety, and banks have said no to working with the NRA. It is clear that part of their financial problem is head gun nut Wayne LaPierre's salary of around $1 million. His side benefits include, according to a leaked letter...

Showing how low the NRA will stoop in its propaganda, Oliver North replacement, the new president, Carolyn Meadows, said about a leading proponent for gun control in Congress, Rep. Lucia “Lucy” McBath (D-Ga.) that she only won her election because she’s a “minority female.” Great start but this just emphasizes the total sleaziness of this organization.
I have posted on the NRA over the years and actually received death threats for some of my posts. These are obviously the lowlife of the gang of gun nuts, but some members espouse reasonable gun control. Today I join with the gun control advocates who welcome the demise of the NRA. The question is will the congressional gun nuts let their treasure trove go down the tube. The coming months will be interesting.