GOP gerrymandering going down the tube 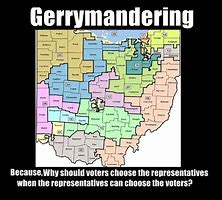 "A federal court has ruled that Ohio's congressional map is an 'unconstitutional partisan gerrymander' and must be redrawn by the 2020 election, reports National Public Radio. The Republican unethical ploy for keeping Democrats out of the voting booth is being axed all around the country. It is a result of the Dems allowing the GOP to establish strongholds on local and state levels while the dimwit Debbie Wasserman Schultz ran the Democratic National Committee.

States continuing the action are Texas as the fifth-most gerrymandered state, behind North Carolina, Pennsylvania, Michigan, and New York. As I recall, this all started during George W. Bush's administration with Karl Rove as the head perpetrator. Now Ohio judges...

"agree with voting rights groups in their argument that Ohio's districts were 'intended to burden Plaintiffs' constitutional rights, had that effect, and the effect is not explained by other legitimate justifications.'"

In other words, Republicans were caught with their hands in the voting box. Which means that the Grand Old Party will stoop to just about anything to get its way. And we can thank this gerrymandering for many of the Republicans now in Congress. That is the reason to get all these cases through the courts as soon as possible so Democrats will have a fair shot in 2020. Of course that won't prevent Donald Trump with coming up with more bogus voting fraud.

Every ten years following a census the "boundaries of congressional and state legislative districts are redrawn, in what’s known as the redistricting process," according to Vox. The process explained...


"In most states, the new maps are drawn by the state legislature and then approved by the governor. So partisan control of each of those three political entities is crucial. If a single party controls all three, that party can usually draw whichever maps they want without giving the opposition party any say. If control is split, a compromise will usually result."

Based on the above, you can understand how the Democrats fell behind and are now playing catch up. Can't say the Dems are the brightest bunch yet but trust they won't let this happen again.
at May 05, 2019