Have we just witnessed the Trump laugh of the century? 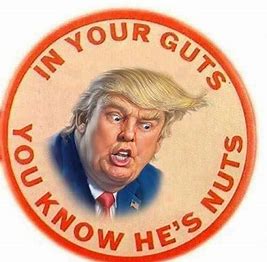 Here's the headline: "Trump urges Republicans, Democrats to ‘come together for the good of the American people.'" And it is the source of 99% of Washington bedlam that is speaking those words. Just look at the recent turnovers in the administration, described by CNN as constant chaos. The conservative Washington Examiner is mentioning none of the above as it quotes the absurd tweets of T-rump in trying to play down the results of the Mueller Report.

The WE did mention that "no Americans participated in collusion with Russia, but did not clear Trump of obstruction of justice." What it didn't say was that Mueller laid the groundwork that basically showed Trump's obstruction of justice, some that could be addressed by the U.S. Congress, and is being pursued by the New York Attorney General. Wm. Barr's blockade on the Mueller Report can be thanked for Trump's recent aggression on the issue.

Politifact published a scorecard on the Oval Office lunatic recently showing that Trump's statements are true only 5% of the time and are false 34% of the time, mostly false 21% of the time. That's a total of 55% and a disgrace when it is the person who runs our country. In all fairness, the Washington Post published an article recently of the 10 best things Trump did in 2018, some of which are questionable. But none of this would constitute a peace offering.

I'll believe this man really wants accord between parties when he hands in his resignation. Until then...just more chaos.
at May 04, 2019