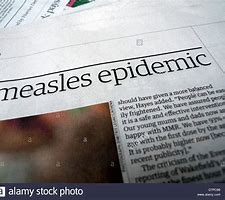 It is hard to believe the number of lawmakers, federal, state and local, that have the mentality of a goose egg. In spite of the fact that we now have 764 cases of measles in Arizona, California, Colorado, Connecticut, Georgia, Illinois, Kentucky, Michigan, Missouri, New Hampshire, New Jersey, New York, Oregon, Texas, and Washington, legislation to exempt is on the rise. However, bills that fine people who fail to vaccinate are gaining attention

It is hard to comprehend this stupid reasoning of exemptions when these people should be working together to pass bills that would require parents to vaccinate their children. This is not a matter of free choice when parents send their unvaccinated kid to school to infect fellow students and teachers, who then go out and infect the rest of the population. The actual "rights" that exist here are those of the individuals who do not want to be exposed to the disease.


"On Sunday, Germany's health minister proposed fining parents of school-age children who haven't received a measles inoculation up to $2,790."

"On the heels of a historic outbreak of measles in New York City last month, officials ordered people in four affected zip codes to get vaccines, with anyone failing to do so facing fines of up to $1,000."

I would think fines actually imposed and not just promised would be an excellent means of telling these halfwit anti-vaxxers that a sane public means business. 72% of the public says that parents should be required to vaccinate their children. The NBC/WSJ poll also found that, "There is also variation between different age groups, with Americans ages 35-49 least likely to support required vaccinations." This is interesting in that this is the group most likely to have children.

The Washington Post has actually mapped out measles cases showing where the current outbreaks are with comparisons of years in the past. The report also includes documentation of exemptions...


"Parents in 17 states can opt out of vaccinating their children if they cite personal or philosophical objections. All states have medical exemption laws since some people cannot be vaccinated because of health issues, such as weakened immune systems. Almost all states grant religious exemptions for people who have religious beliefs against immunization."

An epidemic is defined as a widespread occurrence of an infectious disease in a community at a particular time. Not only is the measles outbreak widespread within communities (like New York state) it is widespread across the country, as illustrated on the Washington Post map. I know the Mueller Report is important but at least people aren't dying from it, at least not yet and as far as I know.
at May 08, 2019