Trump would be in jail if he wasn't president? 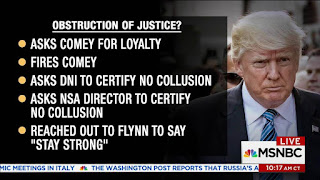 This is a huge question that looms in Washington and around the country today, 'Would Trump be in jail if he wasn't president?' If more than 450 former prosecutors are correct, he would be. These legal professionals...


"have signed on to a statement asserting special counsel Robert S. Mueller III’s findings would have produced obstruction charges against President Trump — if not for the office he holds."

No doubt a precedent for a sitting president but certainly a disgrace for most of the American people, and certainly around the world. Matt Zapotosky of The Washington Post says that statement...


"offers a rebuttal to Attorney General William P. Barr’s determination that the evidence Mueller uncovered was “not sufficient” to establish that Trump committed a crime."

Although Mueller didn't commit on whether Donald Trump should be charged, "citing a Justice Department legal opinion that sitting presidents cannot be indicted, as well as concerns about the fairness of accusing someone for whom there can be no court proceeding," he pretty much left it up to Congress to decide. But the cowards they are, led by the lowlife Senate head, Mitch McConnell, have done nothing.

Rudy Giulani's ex-assistant was even among the former prosecutors protesting, signing a statement Monday that Trump would have been charged with obstruction saying...


“Each of us believes that the conduct of President Trump described in Special Counsel Robert Mueller’s report would, in the case of any other person not covered by the Office of Legal Counsel policy against indicting a sitting President, result in multiple felony charges for obstruction of justice.”

Jeffrey Harris was deputy associate to the attorney general and an assistant to Giulani as Donald Trump's lawyer. The statement in question "seeks to refute Attorney General William Barr’s decision that special counsel Robert Mueller presented evidence that was insufficient to conclude that Trump committed a crime," according to Jessica Kwong of Newsweek. The group also made the following statement...


“There are potential defenses or arguments that could be raised in response to an indictment of the nature we describe here. But, to look at these facts and say that a prosecutor could not probably sustain a conviction for obstruction of justice—the standard set out in Principles of Federal Prosecution—runs counter to logic and our experience.”

But Trump hasn't given up. On Tuesday, "the White House ordered former counsel Donald McGahn not to hand over documents related to special counsel Robert Mueller’s probe that House Democrats are demanding to examine." This all boils down to the fact that the magnitude of what Donald Trump must hide from is so magnanimous that he will go to any length to keep it from becoming public. And that folks, is the 45th president of the United States.