I really am loyal but I don't like the jerk. Those are my words, but it is actually a fact that less "than half of Trump supporters ascribed any positive traits to their chosen candidate, according to a June-July 2016 Pew survey." The survey also found... 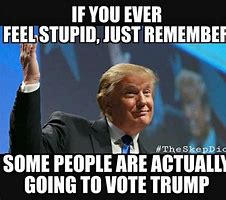 "Very few consider him well-informed or admirable. Only a minority expected that he would be willing to work with those he disagrees with, that he could unite the country, and that he is honest."


"They did, however, feel that he has deeply held beliefs and that he is extreme."

Wow! I knew that Donald Trump supporters were double-digit maniacs, but this kind of information leads me to believe that they are complete morons. There are more interesting demographics...


Trump draws more men than women; And the voters are older, 40+,the 18 to 29-year-ages don't care for him; his followers are uneducated; they are in a lower income group; his flock is mostly white, only 7% black, around 25% Hispanic; and he attracts evangelicals, which is a huge surprise based on his blatant immorality; Finally there is a racial diversity with his anti-Muslim and immigrant policies.

The study by Pew Research, one of the highest rated and respected in the field, illustrates just what the typical Trump supporter looks like...


"They are primarily white, older men with low levels of education and income. They believe that immigrants and free trade deals have harmed their earning power (and they're right about the free trade deals), and they prefer an America in which white people are the majority. Trump's worldview and platform ​seem to resonate with them."

But, looking toward the future, Pew also claims that 20% of Trump's voters have soured on him. Please hold that thought until 2020.