Here's a fact: "Corporations are paying a smaller share of federal tax revenue than they did in the 1950s, dropping from one-third then to only one-tenth of the total today." Here's more from Americans for Tax Fairness... 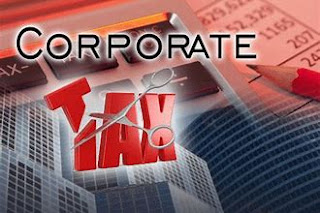 "Yet, an army of lobbyists is pushing hard to convince Congress to cut the corporate income tax rate by nearly one-third — from the current 35% to 25%. This issue is at the epicenter of the coming battle over tax reform."

Bernie Sanders has been screaming this to anyone who would listen for his entire political career. Here are more facts...

Corporations complain about their tax rates but...


"The top statutory tax rate of 35% in the U.S. is somewhat higher than that of 30 other OECD countries, but the average effective tax rate — the actual rate paid after deductions and credits — is slightly lower than our competitors, according to the Congressional Research Service (CRS).
"Several studies have found that U.S. corporations pay a similar or a lower effective tax rate — the rate actually paid — than corporations in other countries."


"This ITEP (Institute on Taxation and Economic Policy) report provides the first comprehensive look at how corporate tax changes under the 2017 Tax Cuts and Jobs Act affect the scale of corporate tax avoidance. The report finds that in 2018, 60 of America’s biggest corporations zeroed out their federal income taxes on $79 billion in U.S. pretax income. Instead of paying $16.4 billion in taxes at the 21 percent statutory corporate tax rate, these companies enjoyed a net corporate tax rebate of $4.3 billion."

Go to this site for startling figures on who is not paying their fair share, as Bernie Sanders puts it. With escalating profits, conniving corporations leave it up to the American taxpayer to foot the bill, the ones who contribute to corporate profits. Legitimate deductions to decrease a fair tax is one thing, but in each case U.S. companies have an unfair advantage over the average taxpayer. This is why it is so important to elect Progressives to Congress and the White House.