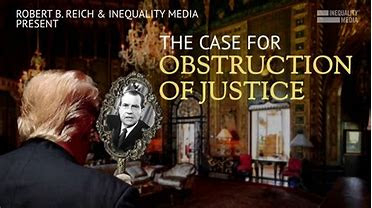 Impeachment is in the air all around Washington with Speaker Nancy Pelosi saying that Donald Trump is just "goading" the House to impeach him. I did a recent blog post, "American public should be itching for Donald Trump impeachment?" that had high viewer appeal and has been typical of this issue all along. Now this...

This has been classic GOP reaction to pretty much everything Trump has done, working not for the American people, but only for the Republican Party protecting this idiot. AlterNet reported Coons saying...


“Those who have read the Mueller report cannot avoid the conclusion that the president and some of his advisers engaged in profoundly disappointing, reprehensible conduct that would rise to the level of obstruction of justice.“

As this same conclusion reverberates around Washington, Congress sits on its fat asses doing nothing. In another post, "Two valid reasons for Donald Trump's impeachment," the most crucial was the letter that 450 ex-prosecutors had signed to prosecute Trump for obstruction of justice. That number has now surpassed 800. But none of this seems to sway the Oval Office lunatic since he has recently blocked around 20 requests from the Democratic House for information.

Camerota asked, “You don’t think Republicans are thinking that privately, do you?” The conversation continued...


“Yes,” the Democratic senator replied without hesitation.“
What makes you say that?” the CNN host asked.
“Conversations,” the now hesitant Coons replied.

“So it’s not so private,” Camerota continued, before adding, “You have spoken to Republicans who think it is impeachable?”

“There is a difference between thinking the Mueller report reveals conduct that is deeply disappointing, inappropriate, borderline or actually illegal and saying they would vote to remove the president,” Coons admitted. “Many revealed concerns privately about the Mueller report in part because of the gap between what Attorney General [Bill] Barr characterized as being in the report and what was actually in the Mueller report for those who have taken the time to read through it.”

Okay, there is general consensus that Donald Trump obstructed justice. It apparently exists across both aisles, non-partisan, so what are the ramifications of this charge. First, obstruction of justice is a felony. Second, it is punishable by up to five years in prison.  Third, there is no statute of limitations. I'm good with all three but let's not wait, the maniac is constantly at work.