The impeachment of Trump draws near


Public support for impeaching Donald Trump has risen 5 percentage points, just since mid-April, to 45%. Although 57% say all these probes are interfering with government business, it wasn't clear from the poll if Americans wanted the Democrats to back off Trump. House Speaker Nancy Pelosi said... 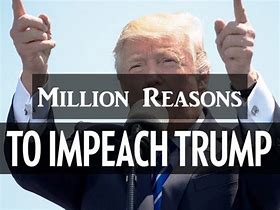 
Reuters says that Trump is "stonewalling" several inquiries relating to the Mueller Report...

Does all this sound like a man who is not guilty? James Comey said, "it sure looks like" Trump had criminal intent to commit obstruction of justice during special counsel Robert Mueller's investigation, on a CNN Town Hall with Anderson Cooper. One incidence in particular was the firing of former White House counsel, Don McGahn. Comey exclaimed further...

Another ex-insider [Comey] who clearly believes that the Oval Office lunatic obstructed justice. It was just last Wednesday that "Trump invoked blanket executive privilege over Mueller's full report, escalating a looming constitutional confrontation over the report between his administration and congressional Democrats." The big question still looms, could this backfire on Democrats for 2020? Or, is it finally time to just do the right thing?

The Atlantic says that Democrats could arrest William Barr to force his hand resulting in the following...


"Courts have recognized that the House and Senate each have the authority to enforce their orders by imprisoning those who violate them—literally. They can direct their respective sergeant at arms to arrest officials they’ve found to be in contempt and bring them to the Capitol for trial and, potentially, jail."

The contempt resolution now goes to the full House, where it will likely be approved, with the following possibilities...


"They could refer the matter to the U.S. attorney in Washington, D.C., who would decide whether to launch a criminal prosecution of his own boss, the attorney general. Democrats could turn to the courts to enforce the subpoena. Or they could take matters into their own hands and call their sergeant at arms."

To impeach or not impeach. Perhaps the American public will finally answer this question.