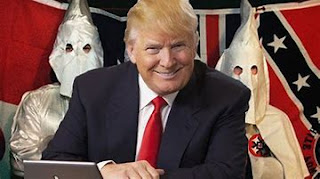 "Two men accused of being members of a white supremacist group and arrested after the deadly "Unite the Right" rally in Charlottesville, Virginia, pleaded guilty to federal charges Friday," reported NBC. Joe Biden in his recent announcement for running in 2020, quoted Trump as saying, “very fine people on both sides” about the 2017 white-nationalist rally in Charlottesville. T-rump tried to spin it another way but his support of this hate group is obvious.

Well, the Oval Office lunatic has made his latest move in backing the white supremacists movement by tweeting his defense for far-right figures banned by Facebook, Louis Farrakhan, Paul Nehlen, and Alex Jones. Farrakhan is notorious for using anti-Semitic language, Nehlen is anti-Semite and ran for Congress in 2016 and Alex Jones is a far-right conspiracy theorist. No matter what else you think of Trump, he is clearly a rabid racist.

On the banning of the above, which Trump was reacting to, Facebook said...

"We've always banned individuals or organizations that promote or engage in violence and hate, regardless of ideology."

Facebook claims their move is for purposes of safety, and they have also banned others in the past like fringe right-wing media personalities Paul Joseph Watson, Milo Yiannopoulos and Laura Loomer. What bothers me most is that if the Oval Office lunatic is blatantly supporting a host of white supremacists, doesn't that mean that the loyal gang who aggressively backs him is also white supremacists? Now this is scary since T-rump's base is supposedly in the 30 percent range.


"The president’s handling of Charlottesville was not one of the finer moments of his time in office. He shouldn’t take Joe Biden’s bait and re-litigate this controversy.”

But we know that Donald Trump can't stand criticism, especially now from his potential competition in the 2020 election. "Trump advisers maintain that the president’s comments about Charlottesville were — in the words of White House counselor Kellyanne Conway on Sunday — 'darn near perfection.'” With no constraints on this White House, it is obvious this moron will run amok and what is even more frightening is the fact that his followers love it.