I couldn't say it better so I will just quote the Washington Post headline... 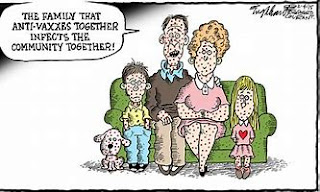 The author of the opinion piece says she loves her children and believes these anti-vaxxers love theirs too. If the latter is the case, then they must be complete idiots with their actions going blatantly in the face of evidence that vaccinations save lives. Juliette Kayyem continues...


"But, I am quite confident in this fact: I love their children much more than they love mine. These anti-vaxxer parents — call them free-riders or even pro-plague — are putting my children and our communities at risk to cater to their erroneous belief that vaccinations would harm their children rather than contribute to the elimination of childhood diseases."

Kayyem wants to switch the focus on the measles epidemic from a public health problem to a public safety crisis, accompanied by arrests, fines and isolation. BINGO! My thoughts exactly, as you can read in past posts. With Trump admitting we have a big problem, it is now up to the U.S. Congress to put these uniformed parents in the position of vaccinate...or else. The patience period has ended and if we don't want a pandemic in this country, we must act now!

As of April 26, there have been 704 measles cases in the U.S. The last closest outbreak was 667 cases in 2014, which originated at the Disney theme park in Los Angeles. As Kayyem indicates, we are in an avoidable crisis that was caused by irresponsible parents, many of which were misguided by social media. She comments further...


"Imagine, instead, that this outbreak is what happens when negligent people do negligent things, such as sending a kid to school with a loaded gun and hoping for the best."

Now there is the best comparison I have seen of this senseless epidemic. Sending your unvaccinated kid to school is like putting a gun in their hand just before getting on the school bus. They both can kill!

PLEASE LET ME HAVE YOUR COMMENTS ON THIS ISSUE.