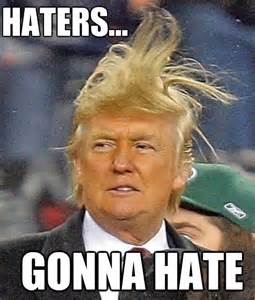 I recently did a post on Donald Trump's use of racism to fuel the many racists out there looking for a new leader.They found him and, unfortunately, he will be leading the most powerful country in the world in less than two months. In that post, The Southern Poverty Law Center (SPLC) reports that over "300 incidents of harassment or intimidation have been reported following Donald Trump's election Tuesday [Nov. 8] night."

Then on Saturday, The Southern Poverty Law Center counted more than 700 cases of hateful harassment or intimidation in the United States since Election Day on November 8. An additional 400 cases in less than two weeks. Many have accused Trump of fostering xenophobia and particularly Islamophobia, which stems from his earlier statements re. banning Muslims from the U.S., later establishing a "radical Islam commission."

Then, abruptly, the President-elect sobs he is "so saddened" to hear this is going on and tells the public on "60 Minutes" to stop it. I am not a physicist, but what Donald Trump has brought forth in hate and racism during his campaign now appears to have achieved the form of perpetual motion, perhaps unstoppable. Swastikas and the word "Go Trump" were painted on playground equipment at Adam Yauch Park in Brooklyn, according to the New York police

New York City Councilman Brad Lander, who represents that part of Brooklyn, wrote on Twitter: "Yet more hatred & anti-Semitism from Trump supporters." In Denver, a transgender woman's car was spray-painted early Wednesday morning with a swastika and the words 'Trump' and 'die,' among other derogatory terms." "Heil Trump," an anti-gay slur and a swastika was painted on the side of the church, Saint David's Episcopal, in Beanblossom, Indiana.

I think you get the idea. Just in case you don't, all you uneducated rednecks out there have elected someone to the highest office in the land that is capable of starting Charley Manson's Helter Skelter. Trump didn't take his followers to the mountains of California like Charley did, that would be too bizarre for even him--besides, Melania would never camp out--the presidential contender somehow got to them in the corn fields, cotton fields, cattle farms, etc.

But you did it and we all have to live with it. I'll leave you with this:

"I have decided to stick with love. Hate is too great a burden to bear." Martin Luther King, Jr.