Is the Conspiracy theory QAnon's explosion on Internet out of control? 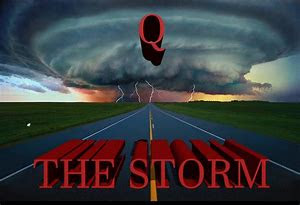 This question of 'who is Q" cannot be answered until we know what QAnon is, and so far that is a mystery that only Q knows. As one reporter commented, since it, “first crawled out of the Internet’s churning goo, the theory has metastasised.” In its gooey slime, it has added Donald Trump to the conundrum. Q followers, who call themselves bakers, follow a path of conspiracy theories called "breadcrumbs," basically believing "the US government has been secretly investigating Democrats and the Justice Department will soon reveal compromising information about Hillary Clinton."

The above, alone, would surely seem to associate QAnon with Donald Trump and his attacks on the Democratic establishment. The whole thing got its start on "the 4chan internet forum titled “Calm Before the Storm.” The page link here has a video of a follower that amassed a lot of information if you are willing to spend an hour with it. The narrator emphasizes that QAnon is neither religious nor political and has its followers such as Rosanne Barr and Curt Schilling. At Trump's Florida rally, signs read  “We are Q,” another “WHERE WE GO ONE WE GO ALL.”


“The president condemns and denounces any group that would incite violence against another individual and certainly doesn't support groups that would promote that type of behavior.”

It's hard to tell if she knows something we don't or this is just another of her air-head statements.

In Arizona, the home of conspiracy theories, Q falsely claimed an abandoned homeless encampment in Tucson was a child sex trafficking camp even after local authorities investigated and found no evidence to support the claim. Another incident, unexplained, in June, an armed Q follower blocked an entrance to the Hoover Dam with his vehicle. But this statement from a NY Times reporter tops them all, commenting on conspiracy theories that are usually about evil cabals manipulating world events...


QAnon, by contrast, “is a conspiracy theory in which the good guys - in this case, Trump and his allies - are in charge."

Michelle Goldberg should just go back under her rock.

Email ThisBlogThis!Share to TwitterShare to FacebookShare to Pinterest
Labels: ” “WHERE WE GO ONE WE GO ALL”, 4chan “Calm Before the Storm, Donald Trump, QAnon
Newer Post Older Post Home