Most agree Medicare for All is NOW 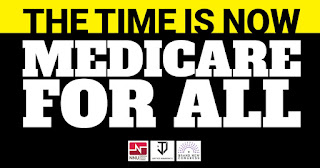 FactCheck.org has probed the recent study published by the Mercatus Center at George Mason University that says the "Medicare-for-all plan laid out by Bernie Sanders will save American people $2 trillion over a 10-year period. The author of the study, Charles Blahous, says 'wait a minute, maybe I didn't say that.' First of all, I have to tell you that Blahous' paper was sponsored by the Koch Bros., who contribute heavily to George Mason U. And Bernie's $2 trillion savings have a lot to do with his projected savings on medical care and prescriptions that seem to me perfectly logical.

Blahous doesn't disagree with Sanders, just prefers to believe his figures instead, which are less optimistic. Bernie counters with, of course Medicare for all will cost more overall but with its collective savings in purchasing power, plus cutting back on health care needs by helping those who need it, resulting in more general wellness. As before, Sanders presents other major companies who do have universal health care like Canada, Denmark, Germany, Israel, Mexico, Norway, Sweden and the United Kingdom, plus several more smaller and even third-world countries.

The real question is, one Bernie Sanders has been asking for years, is, can we really afford not to have UHC in such a rich country like the U.S., especially when you see so many homeless on the streets, many of which are suffering from mental illness?
at August 13, 2018