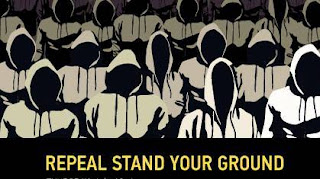 Stand Your Ground is without a doubt one of the stupidest laws to ever be passed in this country, thanks to Florida's Marion Hammer, top National Rifle Assn. lobbyist. First it was Trayvon Martin killed by George Zimmerman in 2012, who eventually got off scot-free, but since has experienced a number of personal problems as a result. This time Michael Drejka, 47, didn't get away with it with the killing of another black man, Markeis McGlockton in Clearwater, Florida. McGlockton, 28, was shot and killed on July 19, after shoving Drejka to the ground at a convenience store.

Drejka invoked the Stand Your Ground law, the sheriff refused to arrest him on that basis of the law, but Bernie McCabe, the state attorney for Pinellas County, decided to file charges based on the exact same investigation sheriff Bob Gualtieri had collected but did not file charges. Good 'ole boy vs. finally some common sense in Florida. So, another NRA creation for the purpose of protecting the gun nut over the innocent public from gun violence suffers a setback. It is prime time for the public to understand that the only way to stop this daily rampage of bloodshed is to get rid of the NRA.