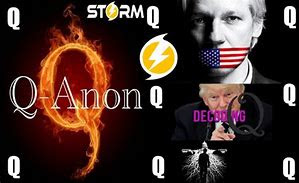 OK, what the hell is QAnon? It is hard to explain, if not impossible, but its followers include Alex Jones, Rosanne Barr, Sean Hannity and Donald Trump Jr., as well as Donald Trump supporters. It comes from the "1996 movie “White Squall,” about a deadly storm, where the QAnon motto “where we go one, we go all” comes from. It seems to have its origins simply in the creation and spreading of conspiracy theories, like that of Alex Jones exclaiming the gun massacre at Sandy Hook never happened. It is a small group so far, but considering the spokespeople, above, could spread into a violent movement it's believed.

There are T-shirts for the people involved, some of which showed up at a Donald Trump rally, the wearers from which he took questions re. conspiracy theories. This concept centers on a mysterious and anonymous online figure — "Q," who claims to possess a top-level security clearance and evidence of a worldwide criminal conspiracy. NPR's explanation...

It goes like this: Special counsel Robert Mueller isn't actually investigating Trump and his 2016 campaign for their possible ties to Russia, and he's not really looking into Russian interference in the 2016 presidential election.

Rather, Mueller was appointed by Trump to investigate Hillary Clinton, Barack Obama and other top Democrats, like former Clinton campaign chairman John Podesta. According to posts written by "Q" — dubbed "breadcrumbs" by the theory's followers — even Sen. John McCain, R-Ariz., is a target of Mueller's so-called investigation.

And if you understand all this, please leave a comment and explain it to me.
at August 10, 2018