Tuesday night places Republicans on the run for the House 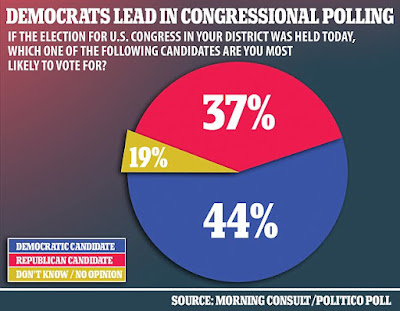 Troy Balderson, the Republican candidate, looks like he has barely defeated Danny O’Connor in Ohio's 12th District. The reason RealClear Politics thinks it is a Democratic victory is that the District is heavily Republican, the most of sixty in Ohio, and there are still 3,500 provisional ballots to count. The results actually mirror the recent trend for Democrats to take over the house. The last time this seat was open back in 2000, the GOP's candidate won by 10 points. Turnout was down in the rural areas of the 12th district, with the urban areas coming to the aid of the left.

There's more. Democrat votes were even up in the suburbs of this district, which could indicate that the Dems are finally getting off their butts and voting. Outside of Ohio, Washington state, in the its 8th District, which looks like Ohio's 12th, Democrats are ahead by three points. But in the end the Dems must muster up the base force of "urban liberals, college-educated whites, and various minority communities." And it is also time for Progressives to get their act together bringing voters to the polls. And then on to the Senate.
at August 09, 2018