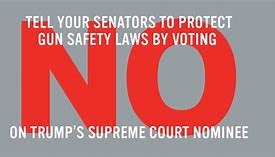 The gun control folks consider Kavanaugh's position on the 2nd Amendment "extreme" and of course he is in bed with the gun lobby. With the Senate Judiciary Committee expected to begin confirmation hearings for Kavanaugh next month, gun control activists need to get their act going to fight the confirmation. Dems are demanding Kavanaugh records on his tenure with GWB White House, claiming they are critical to public's approval of the justice. The left is hopeful for a delay but with Mitch Mitchell heading up the Senate, any underhanded move is possible from this political swindler.