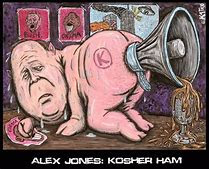 I have been blogging now for almost 15 years and both Twitter and Facebook, plus Google+ and now Pinterest have been very helpful in sharing my blog posts. I think Mark Zuckerberg is one of the most arrogant persons I have ever known about, on a parallel with Donald Trump. His (Facebook's) handling of your privacy information is shocking and downright scandalous, precisely why he gets the very minimum required from me. But since the latest uproar against Zuckerberg and Facebook my referrals from FB have dropped to a minimum, compared to Twitter.

Now, Jack Dorsey, who heads Twitter, is defending Alex Jones, the wacky conservative radical and his broadcast network Infowars, after it was banned by Apple, Facebook, YouTube, and many other companies. I am a staunch defender of the 1st Amendment but Jones is a real nut job who came up with the conspiracy theory that the Sandy Hook Massacre of 26 people including 6-year-old children, never happened. If Dorsey wouldn't censure him for content, he could have for the fact the whole thing is an outright lie, which is a proven fact. Alex Jones followers are even more pathetic than those who watch Fox News.
at August 08, 2018