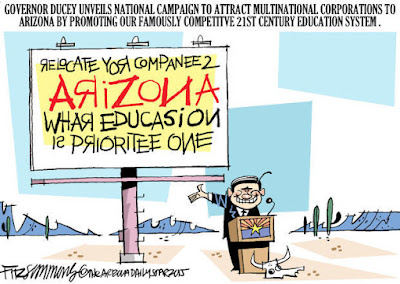 Doug Ducey, Governor of Arizona, isn't the brightest politician in the pack, and he has been considered a worse governor than Jan Brewer, if that's possible, but he made a recent move that may just cost him even more votes in November, based on recent progressive moves in Arizona. The liberals are waking up here, tired of living under the conservative mantle of a bunch of gun nuts who love their firearms more than they do the lives of their children. My gut would tell me these are the same people who drown their kids daily in backyard pools.

"Ken Bennett [GOP candidate] clearly does not agree with anything we propose, yet he is still willing to have this conversation with our community. I think, ultimately, this shows how much of a coward Doug Ducey is."

Well, we knew how dumb our governor was, now we confirmed that he is a coward. Not sure if this is the way Harb meant it, but Ducey's cowardice stems from his connection to the National Rifle Assn. who heartily endorsed him in his 2014 run for the office. The Arizona gun nuts took it from there and helped put him in the Gov's seat. The question is, as November draws closer, and the NRA slides further into oblivion when it comes to their power, will Ducey, plus the rest of the gun nut candidates across the U.S., abandon the group for greener pastures, which really aren't there.
at August 14, 2018