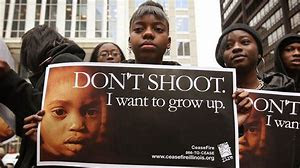 70 PEOPLE SHOT, 11 FATALLY, OVER THE WEEKEND IN CHICAGO: Chicago Mayor Rahm Emanuel always has someone to blame for the city's gun violence, this time it was repeat offenders, but it all boils down to one major problem: The National Rifle Assn.'s continuous plea, led by its head Wayne LaPierre, that if we had more guns on the street for protection, gun violence would go down. We do and it hasn't. Emanuel and his police department are apparently doing the best they can but obviously not enough.

Police Supt. Eddie Johnson appears to be holding the community partially responsible, saying "the shooters need to be held accountable," indicating the need for someone to give up the shooters. Instead, he bemoans, everyone points fingers at the police. As the third largest city in the country, it is far ahead in gun violence of the two largest, New York and Los Angeles combined. But all things considered, it is only a matter of, need a gun? stand on a street corner long enough and you'll make a deal. Or just simply go to the next gun show where they will sell a gun to anyone, no questions asked.
at August 06, 2018