Will Catholics re-think their religion? 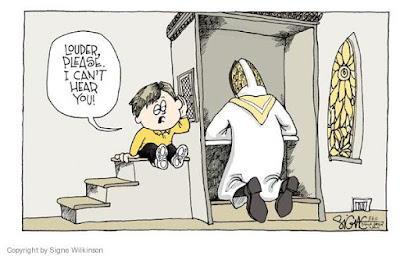 Let me get this straight right here. I am a firm supporter of the LGBT community; 101%! But it seems perfectly obvious to me that the priesthood must attract more than its share of gay men. And there is nothing wrong with that except, some of them are either pedophiles or turn to pedophilia later partly because of the stupid church law against priests marrying. And yet another ridiculous law that women cannot be priests. This rigid doctrine isn't working and being another firm supporter of Pope Francis, I thought something would change under his leadership. By the way, I am not a Catholic.

Sexual abuse in the Catholic church is completely out of control and with a hierarchy in place to protect the abusers, and at best just move them from one diocese to another where they continue their shenanigans, most of the time unmonitored because the new position doesn't have information on past offenses. It's like pedophilia in perpetual motion. And it isn't always gay; in many cases it involves young girls. I know that Catholics are cautioned never to question the church, and that may be worst problem right there. If there was ever a time the Catholic church should be questioned, it is now.