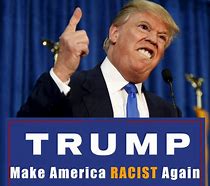 I grew up in the South and regularly experienced the purists of racism, but Donald Trump's style of racial bigotry is some of the worst I have seen. And, it would appear that he is more dedicated to it with his blatant perpetual delivery of insults to anyone...not like him. And that would include most of the world. Basketball player LeBron James just spent millions to open a school in his home town of Akron, Ohio for at-risk children. Don Lemon of CNN interviewed him. This is what Trump said of the interview...


“LeBron James was just interviewed by the dumbest man on television, Don Lemon. He made LeBron look smart, which isn’t easy to do. I like Mike!” (referring to Michael Jordan)

Both James and Lemon are black, as is Michael Jordan, whom Trump probably included trying to offset the backlash that his comment would receive. It didn't.

T-rump is a like a wart on the back of this country's butt that just keeps growing and won't go away. It had to take an appalling mixture of evil genes to spawn this atrocity and apparently it has been passed down at least three times. God save the universe!
at August 05, 2018