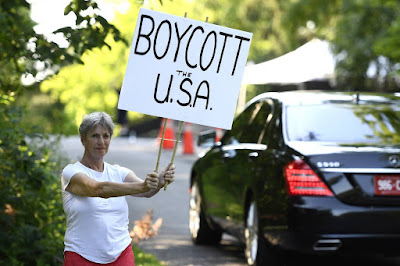 CANADIANS ARE PISSED AT TRUMP-AMERICAN INDUSTRY SUFFERS THE CONSEQUENCES: We have Canadian friends who lived in the U.S. for years and recently returned there; can hardly wait to get their take on the "boycott America" movement. We talked several times in the past about life there compared to the U.S., and I have never heard anyone so satisfied with their country's government. The guy was here for the development of a special software project but since has returned home.

There was a lot of criticism for the U.S., some of which I refused to accept, but most of it was valid. We talked primarily about politics and, of course, 99% of their critique made sense because of our Congress, and the election leading to Donald Trump in the White House. They left just in time. And as far as these folks were concerned, Canada's universal healthcare works fine, even with the wife experiencing cancer. All in all Canada is a great place to live, the reason they went back after so many years. Its progressivism is what impressed me most.

And don't start telling me, 'if you like it so much, why don't you move there.' I believe the United States is the greatest country in the world, but in the last several years it has gone to hell in a handbasket and anyone who can't see that is living under a rock. We could take some direction from countries like Canada who admittedly has its problems too, but seems to portray a more relaxed and prudent atmosphere. I particularly like their gun control. Our friends are happy as hell back in Canada, and I am anxious to hear their reaction to the snub of the U.S.
at August 06, 2018