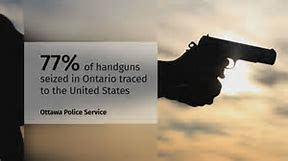 Wendy Cukier, president of the Coalition for Gun Control and a professor at Ryerson University in Toronto exclaimed, "historically in Toronto about two-thirds of handguns used in crimes came from the US." She added, "if you look at Chicago, which is the same size as Toronto, Chicago had 10 times as many gun murders last year as we did." But it's getting steadily worse in Canada and you might say there could also be a copycat effect; monkey see Americans getting away with rampant gun violence, monkey figure they can do the same in Canada. Gun nuts have no conscience nor control.

And there are more handguns in Canada today; 660,000 before 2013 to 840,000 in 2016, firearms which, by the way, require licensing.. But the reactions are exactly the opposite to gun violence in Canada from the U.S. Our cowardly morons in Congress say "Our thoughts and prayers are with you," and leave it at that. Immediately Canadian Prime Minister Justin Trudeau’s Liberal government proposed new legislation for stricter background checks and record controls. And Toronto City Hall is voting on a ban on handguns in city limits. Take that Wayne LaPierre and your stinkin' NRA.