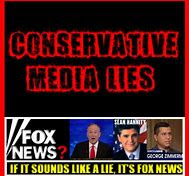 REPUBLICANS, AND SOME DEMOCRATS AND INDEPENDENTS, "WANT TO GIVE PRESIDENT TRUMP THE AUTHORITY TO CLOSE DOWN CERTAIN NEWS OUTLETS": 43 percent of self-identified Republicans said that they believed “the president should have the authority to close news outlets engaged in bad behavior.” Of course, that "bad behavior" would include any criticism of T-rump. Dems and Independents joined in but with significantly less numbers, 12 and 26%. respectively. Most agree this is a result of Trump's tweeting of an "enemy press corps."

On the other hand, the Ipsos poll found that 57 percent of all respondents said that they believed news and reporters were “necessary to keep the Trump administration honest” including a plurality of Republicans. There is no doubt that some of the news media skew their reporting either left or right, decidedly Fox News and Sinclair Broadcast. The liberals have their supporters too but there hasn't been anything like conservative radio before in my lifetime, spawned by Rush Limbaugh and sustained by people like Bill O'Reilly, Glenn Beck and Sean Hannity, all hacks but effective.
at August 07, 2018