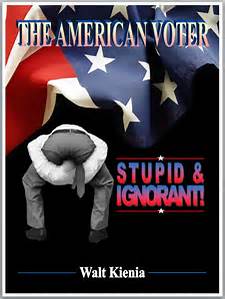 First, let's establish the fact that election spending by candidates is completely out of hand. According to an opinion piece in U.S. News by Anthony Gaughan, "The 2012 election set an all-time record of $7 billion in campaign spending, and the 2016 election is projected to far surpass that figure." 2000 was $3 billion+, 2008 cost over $5 billion with the 2004 election $4 billion. So you can see it's not all the fault of Citizens United.

But it isn't all this money that causes the problem, muses Gaughan, "...It's what too many Americans don't know and won't bother to learn." The last part, "won't bother to learn," really bothers me. The fact is pathetic but true and is the primary reason morons like Donald Trump lead the GOP slate of presidential candidates. I have talked to people who admit they aren't up on the issues and my gut tells me they are just waiting for someone to tell them who to vote for.

This ignorance carries over to things like not even knowing who the Vice president is, which puts that individual in the third grade, or less, as far as their political education goes. Gaughan reasons there are two major reasons for this onslaught of ignorance. First, interest in the news has dwindled. Two, because of the enormous cut back in education spending throughout the U.S., less attention is paid to civics, history and world affairs.

Ask an average American who won the Academy Awards and they can probably tell you. Ask them who their local Congress person is and they are stumped for an answer. So when they are told by some Super Pac to vote for XYZ because ABC is a fraud, they do it. Or some blow-hard gets in front of them espousing hate and fear, they believe him or her. Ignorance of politics should be a crime like ignorance of the law is.
at March 11, 2016