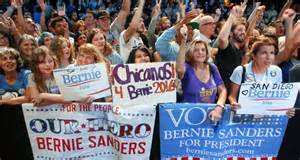 Hillary Clinton said following Super Tuesday results that it was inevitable that she win the Democratic nomination. Sure, and I'm going to be her vice president. Okay, she picked up eight states, six of which were in the South, thus, a win from the black vote. Although Bernie Sanders won only four states, they are more representative of what most of the rest of the country is like: Colorado, Minnesota, Oklahoma and his home state of Vermont.

Much of this reasoning comes from the early results of Iowa and New Hampshire; the former a tie and the latter a blow out for the Bern. Finally getting around to the April primaries, Clinton takes the lead in most but in two states Sanders runs a close second: Wisconsin, Clinton 45%-Sanders 43% and Rhode Island, 49% to 40%. The others are going to take some work. Now, in a recent analysis, Bernie is capturing some of Hillary's Hispanic supporters.

“Latinos will play a pivotal role in Sen. Sanders’ path to victory in important states like Arizona, Illinois, New York, California and Florida," says Arturo Carmona, Sanders’ deputy political director in an MSNBC article. The Bern won big in Colorado where the Hispanic population is 20.7%. So tracking these five states, Latino numbers are Arizona 29.6%, Illinois 15.8, New York 17.5, Calif. 37.6 and Florida 22.5.

When you add the Millennials to the above, on which Bernie Sanders has a lock, the same states in the same order show the following younger population: Arizona 36.2%, Illinois, 37%, New York 37.4 %, Calif. 38.7% and Florida 34.4%. In 2012 54.9% of the voting age population voted so it is easy to come up with the numbers from the latter percentages. These figures are important in determining Bernie's chances of receiving the Democratic nomination.

But the obvious from all of this is that Hillary Clinton's nomination is not "inevitable" and she and her staff know it. What is inevitable is a long fight where the odds are clearly in favor of the Bern. This is supported by the fact that I reported on Feb. 19, that his surge continued with national polls jumping 14 points against Hillary Clinton in just one month. Will the Clinton camp still be saying the same thing when Bernie passes Hillary in the polls? I think not.