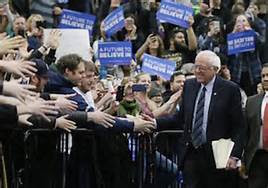 Bernie Sanders feels that his opponent, Hillary Clinton, is upset over his ability to keep winning primaries...like coming from behind in Michigan (20 points) for a solid win. He doesn't say but implies that momentum in the campaign has always been on his side. As a matter of fact it seems that most of the strategy of Clinton's candidacy has been to stop the Bern's momentum. In other words, one would have to say that much of the time she is fighting back from behind.

Surprises like Michigan, if played over in states like Ohio, Florida and Illinois, or any one of the three, could throw Hillary Clinton's campaign completely off balance. She started with the notion that Bernie Sanders was only a flash in the pan but quickly learned that he could become a formidable opponent. He did. Many asked even then if he could continue his early successes. He did. So Hillary has every reason to be nervous going into next Tuesday's primaries.
at March 13, 2016