As usual Mitch McConnell lies through his teeth 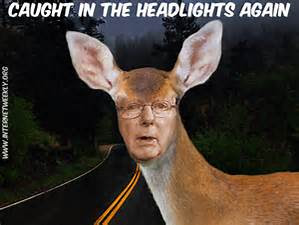 The meaning of "lied though his teeth" is to tell someone something that you know is completely false. And that is precisely what Senate leader Mitch McConnell did when he used the "Biden Rule" as the reason he would not consider President Obama's nomination to fill Justice Scalia's seat on the Supreme Court. I watched him speak on the Senate floor and observed a U.S. Senator intentionally lying to make his point.

Because he hates Barack Obama.

The "Biden Rule" is an "...observation to the effect that if an outgoing president nominates someone before the summer of his last term in office, that person typically receives the Senate’s approval, but that if he or she is nominated during the summer, that person does not — meaning that McConnell even gets what could be called the “Biden Observation” wrong.), as reported by Salon. This was in 1992 when Joe Biden was chairman of the Judiciary Committee.

In another Salon comment, "The Senate Majority Leader said that the august body 'will continue to honor the Biden rule,' which doesn't exist." Continued proof that Mitch McConnell will go to any length to block anything that Barack Obama proposes. Just because it comes from Barack Obama. There are many reasons to get Republicans out of Congress but Mitch McConnell is the epitome of those efforts.
at March 17, 2016