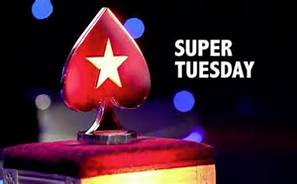 In my post yesterday, I acknowledged that Bernie Sanders had hit his first bump with a loss to Hillary Clinton in the So. Carolina Primary. The loss was quickly qualified somewhat and you can read about it in the above link. What's important is that it is only a bump, and just another reason for you Progressives to come out and work that much harder for the Bern. Today is Super Tuesday and eleven states are in play. Here's the way I see it.

Based on the So. Carolina results, there are four Southern states that would be questionable due to their black population: Alabama 26.2%; Arkansas 30.9%; Georgia 30.5%; and Tennessee 16.7%. Total delegates 289. I am also dubious about Oklahoma, 42 delegates. These five states won't be a total loss and based on percentages (61 percent of voters in So, Carolina's primary identified as black) Sanders delegate count should be higher. So that leaves six states that really count.

In the remaining six states Bernie will compete for the Hispanic vote and the younger vote (age 18 to 44). Bernie carries the younger vote hands down and a recent study found the Latinos were slipping away from Clinton. In the Nevada Caucus the Bern took 53% of the Hispanic vote. In these six states, only two have a sizable Latino population, Colorado 20.7% and Texas 37.6%. The former younger group is 38%, the latter 38.4%, both significant amounts.

The balance of four states' younger populations is Massachusetts 36.8%, Minnesota 35.8%, Vermont 34% and Virginia 37.5%. Vermont with 26 delegates is solidly behind Sanders; Colorado with 79 delegates is about even, may be tilting toward Clinton; Massachusetts with 116 delegates in a recent poll shows Bernie with 42% of the vote, Hillary 50%, obviously needing some work; Minnesota with 93 delegates shows Clinton with a measurable lead but there are still those 35.8% younger voters to deal with.

This younger vote has come through for Bernie in Iowa and Vermont but wasn't enough in Nevada and So. Carolina. It is up to this group to come all out for Bernie Sanders today to give him a comfort level to continue the fight. It is up to you.

Should the Bern lag in some of the above, tying in others, and carrying where his strength is, beyond Super Tuesday looks encouraging. More on that tomorrow.
at March 01, 2016