Mitch McConnell must be dealt with 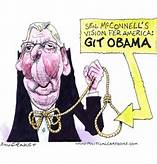 When a member of Congress stands in the way of a President's programs because he opposes the substance of those programs, that is politics. When he does it simply because he hates the President due to the fact he is...Barack Obama, this Congressional person needs a thorough psychiatric examination. I am, of course, talking about Senate leader Mitch McConnell, a confirmed racist in a position of authority he should be removed from at any cost.


Once again McConnell has said no to a lame duck Supreme Court nomination, referring to the President's naming of Judge Merrick Garland for Justice who, by the way, is a disappointment to many Progressives. NBCNews|SurveyMonkey Supreme Court Nomination Poll, conducted online from March 17-18, 2016 among a national sample of 1,838 adults aged 18 and over found 61% think Congress should vote now, 36% say wait for next President.

There are also precedents for naming Supreme Court Justices in the final year of a Presidency reported by Amy Howe, a lawyer and editor of SCOTUS Blog you can read here. These precedents aren't conclusive but they point to a more conducive Congress and certainly none of these Presidents had to deal with a mentally deranged Senate head like Mitch McConnell. McConnell's favorability ratings have taken a nose dive even with his own Republican base.

I realize the American public does not have all the facts when considering Garland. But, then, neither does Mitch McConnell who opposes him not because of his stand on the issues but rather just because he is an appointee of Barack Obama. President Obama will go down in history as one of our greatest Presidents but Mitch McConnell's legacy will be one of holding a country hostage for eight years, placing the nation's progress behind his vengefulness.