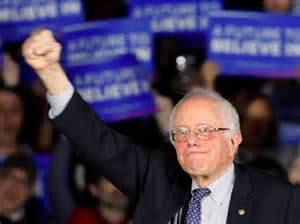 Hillary Clinton won Mississippi but it does look very good for Bernie Sanders in Michigan, a much more important state. The Bern didn't expect to win much of the South and thankfully we have those states out of the way now. At this writing, Bernie led Hillary in Michigan 51% to 47%, 81% reporting. This will be a key win for Sanders for Michigan is a diverse state and the Detroit population, its largest city, is heavily black.
at March 09, 2016