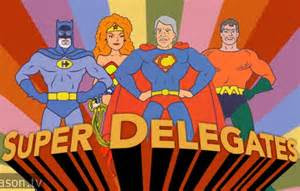 It isn't important that Bernie Sanders said in the past he wouldn't need the superdelegates, because the 2016 election has taken so many surprising turns it is hard for anyone to keep up, even the candidates. What is important is the fact that he now realizes he needs a new strategy to get the nomination. On MSNBC his campaign staff said...


"...that he may not be able to catch Hillary Clinton through the primary/caucus delegate process, but the campaign might come close, at which point Team Bernie might ask superdelegates to give Sanders the nomination anyway, even if he’s trailing Clinton after voters have had their say."

This is why they might be taking this new tact. Back in October of 2015, The Hill said, "Since their only goal is electing a candidate capable of winning the White House, it's highly doubtful Clinton's alleged 60 percent support among superdelegates will remain until the end of the primaries. Like his surge in the polls and the Clinton campaign's continued decline, superdelegates will flock to Sanders for a number of reasons."

The first reason is no longer valid since the Bern's momentum was slowed down by the early Southern states and the black votes for Hillary Clinton. But the momentum is far from gone when we know that Sanders out-raised Clinton in January and vastly out-raised her in February. Second, even though the energy created in Iowa, New Hampshire and Michigan has dwindled, Bernie is still within 10 points of Hillary nationally.

Third, superdelegates want to win. In the general election, Bernie Sanders will win against all three current Republican candidates and significantly. Clinton loses against Kasich big time, would have lost against Rubio, barely winning over Cruz. There are 10 total reasons the Bern will get the superdelegates you can see here. Another is 57% of Americans don't trust Hillary and swing states Florida, Ohio, Penn., Colorado, Iowa and Virginia have negative favorability.

So all of you folks that doubt the outcome of the Primary results, perhaps rightfully so, perhaps, when your candidate changes their strategy that differs somewhat from the past, rest assured that Bernie Sanders is in control and knows full well what he is doing.

Arizona, Idaho and Utah...be sure and vote today. For Bernie.