Mitch McConnell gets it shoved in his face 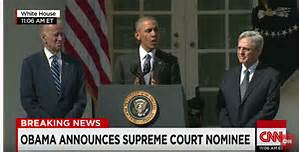 It was the pompous idiot Mitch McConnell who said President Obama's Supreme Court nomination would never be allowed to be voted on. More of the same crap fighting anything the President proposes. First, Senator Mark Kirk, a Republican from Illinois, in effect thumbed his nose at McConnell and said he would meet with the nominee, Merrick Garland, and he has done so. As far as I know, there has been no reaction from moron Mitch.

And then Vice President Joe Biden said, “It’s frankly ridiculous … there is no Biden Rule.” He said McConnell was, "...“quoting selectively” from a speech he made in 1992... "The longer this high court vacancy remains unfilled, the more serious a problem we will face — problem compounded by turbulence, confusion and uncertainty about our safety and security, our liberty and privacy, the future of our children and grandchildren." Biden said.

Just today 16 Republican senators said they will meet with Garland. MSNBC reports, "That includes senators up for re-election in Blue States, such as New Hampshire’s Kelly Ayotte and Illinois’ Mark Kirk, who will be the first Republican to actually meet with Garland..." MSNBC continues, "At least three GOP senators also back a hearing for Garland’s nomination — moderates like Illinois’ Kirk and Maine’s Susan Collins, plus Kansas’ Senator Jerry Moran..."

Obviously Mitch McConnell does not have the backing of at least 25% of the chamber he leads. It's time for this blockhead to be put out to pasture. One thing is for certain, Bernie sanders won't put up with his idiocy when he gets to the White House.
at March 30, 2016