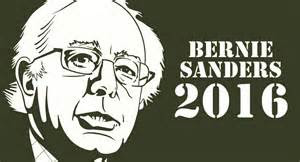 Bernie Sanders lost Arizona to Hillary Clinton but he won Idaho and Utah with overwhelming numbers: Idaho 78% to 21.2%; Utah 79.3% to 20.3%. I live in Arizona and just to mention the word Progressive in this state sends the sheltered conservatives running for cover. The Bern amassed 71 delegates to Clinton's 54. He may be behind (Clinton 1,223 total pledged delegates to Sanders' 920) but the momentum is building again as the primaries work West.

On March 26, Alaska, Hawaii and Washington vote. There are no meaningful polls that I can find for any of the three states but Politico's assessment is, "He’s also in a strong position to reel off a few more victories on Saturday — when caucuses in Alaska, Hawaii, and Washington take place." They add that "the revolution remains stalled," which I disagree with considering one particular factor. Super delegates want to win and Bernie is the most electable.

In a blazing headline this month, Huff Post said, "In Nearly Every Blue, Purple, and Light-Red State, Bernie Sanders Polls Better Against Trump Than Hillary Clinton." These states include Georgia, Iowa, Minnesota, No. Carolina, New Hampshire, Ohio, Virginia and Wisconsin. Hillary Clinton wins in only one, Florida. And it's not only super delegates; the Bern could close that 300 deficit with California (June 7 primary) alone which has 546 delegates.

Add to that Oregon and New Jersey coming up and this fight is a long way from being over.