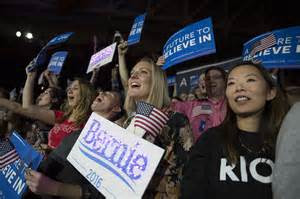 If you're 18 on election day Nov. 8, 17-year-olds are eligible to vote in the Ohio primary on March 15. "Franklin County Judge Richard Frye determined that Ohio Secretary of State Jon Husted, a Republican, erred when he ordered that Ohioans who are currently 17 but will be 18 on Election Day in November not be allowed to vote in the presidential primaries," according to CNN. The decision was legally challenged by Bernie Sanders and overturned.

This age is an important demographic for the Bern improving his chances of pulling off a Michigan upset here. Along with the fact that Clinton's black support dropped before the Motor City election, the Sander's team hopes for more of the same. Demographics in the two states are very similar, and Bernie bases his new-found success on the fact that the black community, formerly in Clinton's court, are learning more about him and changing their minds.