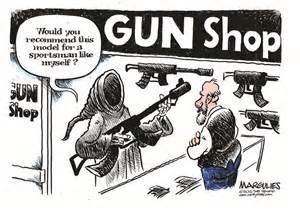 Most of you know me and are well aware that I am an avid, passionate supporter of responsible gun control. I go to the extent that I would take all the cowboy vigilantes off the street and make them keep their guns at home. Don't worry guys, your girlfriend or spouse will still think you are a man...probably. But I don't agree with the parents of the Sandy Hook victim that exclaims Bernie Sanders is wrong about gun manufacturer responsibility for gun deaths.

What these folks are implying is that the morons in Congress have done the right thing by not addressing the real problem of gun violence...too many guns on the street in the wrong hands. The gun manufacturer, in fact, is not wrong selling an AR-15 rifle because it is legal and that is because Congressional idiots let the assault weapons ban expire in 2004. Sure, gun manufacturers are guilty of having absolutely no common sense at times selling them, knowing how dangerous they are.
It's not legally wrong. It is logically wrong. Mark and Jackie Barden should go after the bottom-feeders in Washington that take millions from the National Rifle Assn. (NRA) every year and then vote the way they are told on gun issues. It's sickening to see the way gun violence has taken over this country and the American public doesn't appear to give a shit. I want you to take a look at a report from the Gun Violence Archive 2016.

And folks, this is only since January 1, 2016. But have you heard one member of Congress lamenting over the fact that these individuals died, especially the children? If so, it was not within earshot of the NRA. If you want to lay blame, put it squarely where it belongs, on Wayne LaPierre and his National Rifle Assn. Add to that those gun dealers who recklessly want to sell guns with little concern over who they are selling them to. One such case is straw purchase sales.

I totally agree with the end result the Bardens are fighting for and have great sympathy for their cause. It is just misdirected and infers that our dysfunctional Congress is not to blame for gun violence in America. The people of this country must stand up now and tell Washington that we want responsible gun control
at March 21, 2016