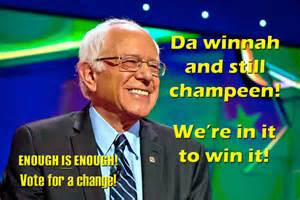 Bernie Sanders decisive sweep of Saturday's Primaries in Alaska, Washington and Hawaii prove the momentum for the Revolution is still as strong as ever. Yes, Bernie trails Hillary Clinton 1,712 to 1,004 in total delegates, but when you remove the 469 superdelegates, her lead is only 268. We know the superdelegates could go to either candidate between now and July. The Bern thinks, and so do his supporters, that he will prove to be the most electable in November.

RealClearPolitics RCP poll averages show Clinton 50.0 to 38.8 against Trump, but only 46.7 to 43.8 with Cruz. Sanders is 54.7 to 37.2 against Trump and 49.6 to 41.2 with Cruz, a clear higher margin of success. The key here is the forces working to defeat Donald Trump seem assured of some success and if so, that would leave Cruz where Hillary holds only a 2.9 spread, Bernie 8.4. And John Kasich beats Clinton by 6.5 where Sanders beats him by 1.

The minute the superdelegates sense that either Hillary Clinton is floundering, or Bernie Sanders is commanding the attention of the American public and can't be stopped, which becomes more evident each day, There will be a mass exodus of superdelegate votes to the Bern.
at March 27, 2016