The Super Delegates will be there 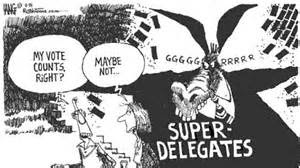 Bernie Sanders said today his lack of super delegates to date didn't worry him because the states involved heavily favored Hillary Clinton. He was more concerned about those states to come in the West like California, Oregon and Washington. Through a little research I found that coming down the home stretch Hillary began to lose super delegates to Barack Obama in 2008, eventually losing the nomination to the current President.

It's a matter of choice, says Nate Silver in his FiveThirtyEight blog, commenting, "Superdelegates were created in part to give Democratic party elites the opportunity to put their finger on the scale..." Isn't this a part of Bernie Sander's promise to balance the inequality in the U.S.? As Silver also remarked, "If you’re a Sanders supporter, you might think this seems profoundly unfair. And you’d be right: It’s profoundly unfair."

Not being a Democrat, the Bern has no control over this process, but something tells me that somewhere in the future the Party will re-think this maneuver.
at March 10, 2016