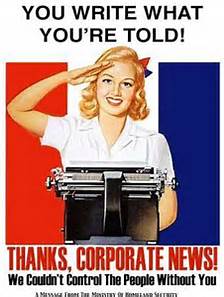 In yesterday's post I pointed out a specific example of how the media is skewing articles and broadcasts toward a mention of Donald Trump to take advantage of a ratings hit. "Susan Sarandon MSNBC interview example of media Trump obsession" points out how the barely mention of Trump in the interview leads to him as the headline, as if Bernie Sanders were an afterthought. When in fact Sarandon gave one of the best evaluations of the Bern's qualities I've ever heard.

This all started with a read of The Nation article, "Trumped by the Media," which points out how Donald Trump has commandeered and corrupted the U.S. media. The Republican Party has been helped measurably because all the attention has increased their voter turnout, which in turn hurts it for the Democrats. "On Super Tuesday, Democratic primary turnout was down roughly a third from 2008 levels." But the GOP turnout was way up.

When you tie this all in with barriers created by Republican passed voter-ID laws, and the media is owned and controlled by big corporations, you have to wonder just what is going on. Here's what Bernie says: "In the United States today, six media conglomerates control almost all forms of mainstream media. Consequently, fewer and fewer people are determining what we watch, hear, and read — compromising our access to accurate and unbiased information."

Here's more from The Nation: "Anyone who understands how the modern media shape the narrative, as opposed to simply reporting on it, knows the answer. As of late February, the wrangling between Trump and his top two rivals (Rubio and Texas Senator Ted Cruz) was given twice as much time on network TV as the Clinton-Sanders contest." It sounds like a combination of chasing ratings while at the same time denying Bernie Sanders his time just because of his message.

And finally, here's the ultimate example of corporate greed over doing the right thing:


"CBS chief Les Moonves says of the ratings and revenue bonanza associated with the Trump moment: 'It may not be good for America, but it’s damn good for CBS.'"

Bernie Sanders couldn't have made his point any better.