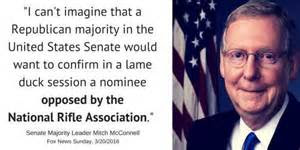 How far will the American people let this lunatic go before sending him packing. The National Rifle Assn. (NRA) run by Wayne LaPierre not only controls the U.S. Congress, but now it controls the Supreme Court. Yes, Mitch McConnell has said in effect that the NRA has veto power over Supreme Court nominees. Not officially, just by controlling members of the senate who will vote just like Wayne LaPierre's minions tell them to. This is beyond disgusting.

The Moderate Voice says, "it has not ever happened that a party would not even allow hearings on a President’s nominee." That is, not until Mitch McConnell came along. MV says, he has..."re-written the rules on Supreme Court nominees: the powerful National Rifle Association now has veto power over all Supreme NRA has taken over control of the federal government." This mentally misguided ideologue is completely out of control.

Now all you gun control apathetics--my term for those of you who say they won't worry about it until it affects you personally--can see how far the NRA has pushed its power, to the extent it now has final approval over a Supreme Court justice. Many in this apathetic group do not even own firearms, but for some stupid reason they are fighting for the right of a gun nut to do just about anything he or she wants to do with their weapons.

The recall of members of the Congress is not permissible as defined in the Constitution. My gut tells me that if it was, there would be a recall in the process right now for Mitch McConnell. Maybe it is time for a Constitutional Amend. to change that but since most of the congressional members worth getting rid of are Republicans, and they now control Congress, the effort would be worthless. In the meantime, shoot for the overthrow of the GOP in November by Progressives.