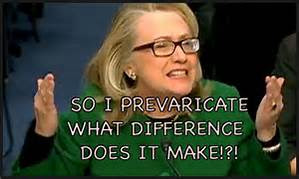 I just got an email from Bernie Sanders that points out the stepped up distortions Hillary Clinton is making on his past record. Read the following quote taken from a Washington Post article:

"But it's striking that, as Clinton has doubled down on the attacks, she has with some regularity played pretty fast and loose with the facts.


"She'll take a vote Sanders has made during his 25 years in Congress and gloss over most, if not all, of the details about it. The result is a carefully worded insinuation or even outright accusation that Sanders has voted against his base on everything from immigration to the auto bailout to fossil fuels."

This is a mark of a running-scared campaign that has been completely diverted from the issues to attempt to stave off the recent surges in the Bern's campaign...like his coming from behind (20 points) and winning Michigan. Something he plans to do again in Ohio and Illinois.

Coming tomorrow, David Axelrod faults Hillary Clinton for doing the very same thing as above in the Michigan debate, this time re. Bernie's vote on the TARP bill/Auto Bail Out.
at March 13, 2016