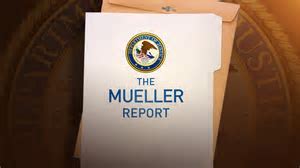 He said, they said. The "he" is Wm. Barr, Atty. Gen. who said about the Mueller Report, "evidence was not sufficient to prove that the president obstructed justice." The 'they' are members of Mueller's investigative team saying, "their findings on obstruction were alarming and significant." Don't know about you but I'm inclined to believe "they said." They're also concerned that, "the summaries they had prepared for different sections of the report for quick discharge, "were not released by Barr.

The Mueller team is pissed, and rightfully so. Barr makes a piddly number of pages available from a 400-page report that is purported to prove Donald Trump's part in some collusion with Russia in his win of the 2016 presidential election, and his part in the obstruction of justice, like firing James Comey. Barr said...


"Mueller did not reach a conclusion “one way or the other” as to whether Trump’s conduct in office constituted obstruction of justice."

But the Mueller team countered...


“It was much more acute than Barr suggested."

If when this is all over and the shit hits the fan as Donald Trump is tried for treason and obstruction of justice, will his double-digit followers then admit just how stupid they have been? Probably not. Pathetic!
at April 05, 2019