Jared Kushner: The 2016 Russian interference "a couple of Facebook ads.” 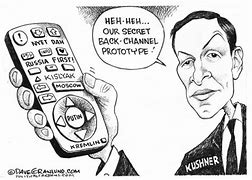 Jared Kushner has finally made a statement since the release of the Mueller Report, and it is typically Trump-family stupid. He said the "Russian interference in the 2016 presidential election didn’t amount to more than a couple of ads on Facebook." Let's look at the facts...

Kushner, who is repeatedly mentioned in the Mueller Report and is considered easier to indict after its release, according to an ex-Watergate lawyer, actually made the following statement...


“You look at what Russia did, buying some Facebook ads to try to sow dissent and do it, and it’s a terrible thing. But I think the investigations and all of the speculation that’s happened for the last two years has had a much harsher impact on our democracy than a couple of Facebook ads.”

This from a man who had questionable credentials for a White House security clearance, and still faces a potential indictment for his part in the Russian investigation. Vox explains his participation...


"He was in the room during the infamous June 2016 Trump Tower meeting between a Russian lawyer who had promised dirt on Hillary Clinton as 'part of Russia and its government’s support for Mr. Trump' and suggested creating a secret back channel to communicate directly with the Kremlin, going around US intelligence. He’s mentioned many times in Mueller’s report for these and other activities that still have not been fully explained."

In addition, Kushner completely avoided talking about "the Kremlin-orchestrated hacking campaign against Democratic targets — hacks that resulted in WikiLeaks publishing tranches of emails online during key stretches of the 2016 campaign." In other words, it is all about selective editing of the truth and then modifying that into another Donald Trump lie. And the beat goes on.
at April 24, 2019