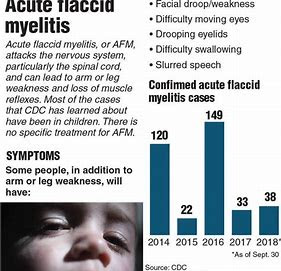 It's called AFM, which stands for Acute flaccid myelitis that is affecting children. It is a "rare, mysterious and sometimes deadly paralyzing illness that seems to ebb and flow on an every-other-year cycle." Here's even worse news...


"Dr. Anthony Fauci, head of the National Institute of Allergy and Infectious Diseases, said it may bear similarities to polio, which smoldered among humans for centuries before it exploded into fearsome epidemics in the 19th and 20th centuries."

Other countries have experienced it, but AFM is more prevalent in the U.S. where more than 550 Americans have been struck this decade, the oldest 32. In some cases, it started with a cold, got better, but the,n took a turn for the worse when the patient "descended into paralysis." The virus was discovered over 55 years ago, and, although not yet proven, may have mutated to become more dangerous. So far there is no cure but a vaccine is hopeful for the future.

If a vaccine is perfected and placed on the market, will we have to fight once again with these double-digit anti-vaxxers to keep them from killing their children with a new scourge of polio-like illness?
at April 03, 2019