Threats required for health insurers to do right thing? 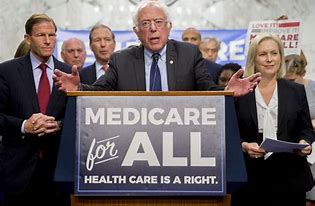 I have never been completely sold on Bernie Sanders' Medicare For All plan, simply because it is so hard to visualize the GOP allowing health insurance companies to be expelled from the marketplace. And I am not sure it would be such a good thing, even though they have been a blight on health care for years. The reason is, I think the government would do a worse job. Perhaps the best approach is a combination of government and private business.

At any rate, health insurers have conveniently decided to add new Medicare benefits. These include...

Of course, this doesn't even come close to addressing Bernie's concept that all Americans should be given their medical care free. On the other hand, there are numerous countries that have universal healthcare, which is paid for by the government...


"the single payer version of Medicare For All would eliminate co-payments, deductibles and allow Americans to pick the doctors they want free of insurance company restrictions and provider network rules."

Apparently, the Medicare Advantage plans are popular today for many seniors with supposed increased benefits that I have never thought were worth the increase in cost. But, back to the original question, why did it take threats from Bernie's Medicare For All concept to make the healthcare industry cough up more benefits? The answer is the greed of the health insurance companies for more profits, and that is why the government should be in control.