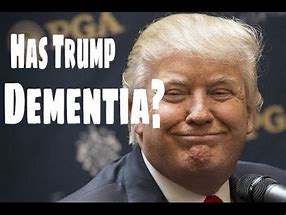 All of a sudden the Internet is buzzing over Donald Trump's cognitive health, and people who know him are talking...


"Joe Scarborough, who has known Trump for years, said in 2017 that Trump's mental confusion reminded him of his mother, who had Alzheimer's for 10 years."

Just reported in USA Today, the event occurred two years ago and you have to wonder, with Trump's recent antics, has he worsened? Yes, says Scarborough...


“It's getting worse, and not a single person who works for him doesn’t know he has early signs of dementia,"

Do we need a person with his finger on the button whose cognitive health is going downhill? Donald Trump shouldn't be in the White House in this condition, he needs to be in a hospital receiving medical care. Psychologist John Gartner, writing in USA, says that President Donald Trump is undergoing significant cognitive decline and must be tested for dementia. Gartner is a clinical psychologist who taught at Johns Hopkins University Medical School for 28 years.

Gartner's concerns have grown over the months "while following the continued decay of the president’s speech patterns." He cites Trump's "choosing the incorrect words," and "the substitution of a word with a nonword that preserves at least half of the segments and/or number of syllables of the intended word." Gartner says both of these are signs of Alzheimer’s, reported in Salon. And then Gartner recalls examples...

"the president demanding to know the 'oranges' of the Mueller probe, as well as references to 'midtowm' and 'midturn' elections.

But The Young Turks do the best job of expressing the real Donald Trump in this video in descriptions only this group could perform. But don't get me wrong, this is serious and needs the immediate attention of Congress.